I recently had to set up team ownership in Dynamics CRM for 1600 Accounts across 40+ Teams. Because of these large numbers, I decided to use the out-of-the-box Import Wizard to speed up the process.

I started with the data import template available for the Team entity and entered the information about three new Teams as shown above. After the import was successful, I began to configure the Team by adding Users and Security Roles and noticed that the "Salesperson" role was automatically assigned to all imported Teams. 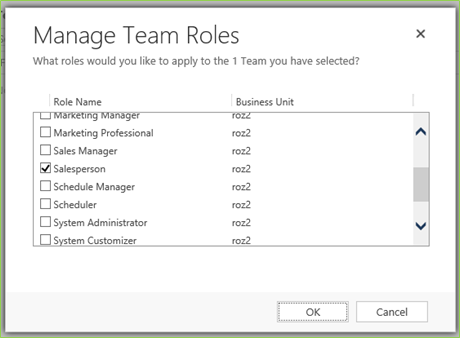 Now, this wouldn't have been a problem if we were using the out of the box security role, but my client doesn't use that role and having it would have given the users the ability to edit accounts. For this client, sales users are not allowed to create or edit Accounts. These are created via an integration and can only be created or updated in the source system.

Note that the automatic assignment of the Salesperson Security Role does not happen when you create Team records manually.

So things to be aware of when importing Teams: