I recently understood the importance of applying a namespace to functions inside JScript web resources in Microsoft Dynamics CRM 2011. We encountered an interesting scenario where a specific function existed in a web resource, but there also existed another function in another web resource with the same name. This can lead to incorrect functionality in a system because the CRM application will attempt to load the first function it finds which may not be the correct one.

When we add these two functions to run onload of the Account form, we get the alert “I belong to the script 2 web resource” twice. CRM seems to think that the only function called “doThisOnLoad” belongs to the web resource that was loaded last. In our case, this is the function that belongs to “script2”.

If we swap the function calls around, we will see that the alert “I belong to the script1 web resource” will be displayed twice. 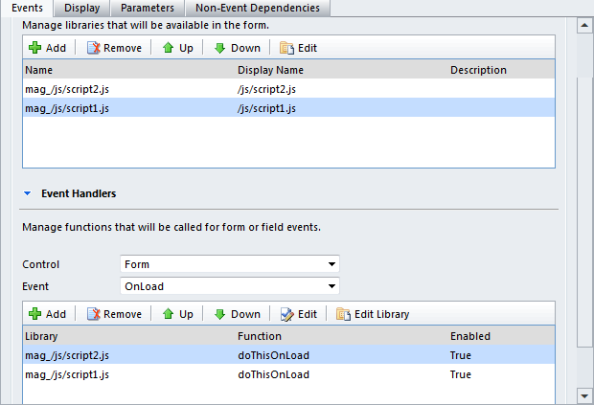 So how do we fix this? All we need to do is modify our functions so that they include a unique namespace so CRM can identify that they are separate functions. For example:

We will also need to change the event handlers on the CRM forms to include the namespace in the function call. Now when we load the Account form, we get the correct result.