CRM 2013 Activate or Deactivate Workflows Owned by Another User

In CRM 2011, whenever we wanted to edit a workflow owned by another user, we had to assign the workflow to ourselves before editing it. Then if that user needed to be reassigned back to the workflow, we would have to assign it back to them, however then we would not be able to activate it, so you either had to get them to activate it, or leave it assigned to yourself which is not always a good option. 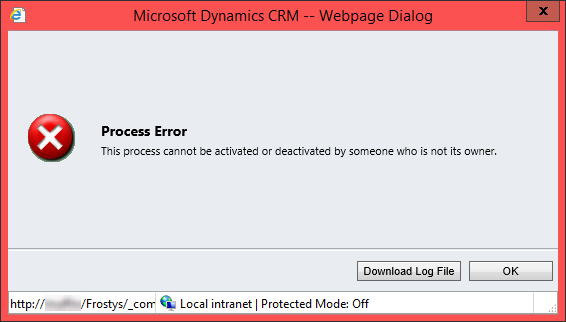 Here we see the error in 2011 when trying to deactivate or active a workflow assigned to another user. Note that if we try to assign an already activated workflow, it will be automatically deactivated.

In CRM 2013 now, System Admins can activate and deactivate workflows even if they are not the owner. They will still deactivate automatically when reassigning activated workflows, however this means we not don’t need to worry about who the owner is if we need to make a change.

We can see on the MSDN page about activating a workflow, it now states that “A workflow can only be activated or deactivated by the workflow owner or by someone with the Act on Behalf of Another User privilege such as the system administrator.”

This is great news, as it means we don’t need to assign workflows to ourselves when deploying solutions with workflows anymore either, which used to cause a solution import to crash and roll back if any of the activated workflows were owner by another user.

If non-sys admins need the ability to edit other users workflows, you can simply assign them the ‘Delegate’ role, or grant them the Act on Behalf of Another User privilege through their existing security roles.