Support for your CRM system - Variable or Fixed

Support is a necessity

An IT system is like a car. The real cost doesn’t stop when the system is installed. It requires ongoing support and maintenance to keep it working effectively. There’s an ongoing expense that can’t be avoided.

‘Suppose you notice your neighbour filling the gas tank of his car from the garden hose. You tell him, "That won't work." And he says, "I know, but it's much cheaper."’
Tom Van Vleck

The right approach to IT system support is to first work out exactly what support you need and then to manage the cost accordingly.

There are many different IT system support pricing models:

· All you can eat

But these, in theory, can be boiled down into just two types: Variable and Fixed price.

Variable price support covers any model where the cost depends on the work done. When it breaks, it gets fixed and the more it breaks, the more it costs to fix it.

Fixed price support means that the cost does not vary. Even if there are no faults or issues, you pay. When there are major problems, you still only pay the fixed price.

In practice, IT system support is often a combination of the two.

Support of an IT system such as a CRM system, may include a number of components or support types and different components lend themselves to a fixed cost approach or a variable cost approach: 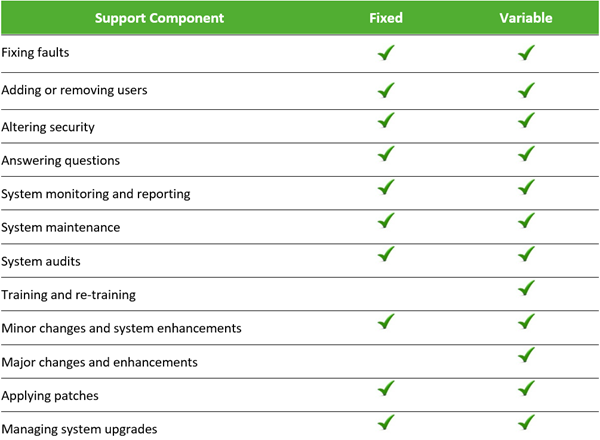 A completely variable approach to support is feasible but comes with inherent downsides:

(a) Difficult to budget, particularly if the cost is significant

A totally fixed price approach is problematic – how should a support partner estimate the cost of training and major changes? But if these components of support are excluded, support can be estimated with reasonable accuracy, and the cost spread evenly and charged monthly.