AI for Good: Gateway to the World through the Microsoft Translator App

I’d love to travel to different countries, experience foreign cultures, and maybe even work or study there for a few years. Living abroad for a year or two can really solidify your understanding of a new culture. Even if that’s not a possibility, a short holiday can open your eyes to a new world with new experiences. Traveling can take you out of your comfort zone and do I need more of that! Although I’ve been curious about travel, there is one thing that terrifies me: fear of the unknown, in particular being in a country where you cannot understand their language. However, I think I’ve found the solution in this gem which is the Microsoft Translator.

The Microsoft Translator is your personal translator. You can take it wherever you go, and it can translate text, speech, images and you can even have translated conversations. It’s very simple to use and most of all it’s free. The Microsoft Translator supports over 60 languages including Māori which has been recently added. Unfortunately, it does not yet support my first language Sinhala, otherwise I could have really tested this out. Luckily, I took French classes during high school so I will use the French and English translations to show you its awesome features below.

You can download the app from Microsoft Store, Google Play or the App Store. Search for the Microsoft Translator App and click Install.

2. Available on your phone or desktop

Microsoft have mentioned that it’s also available on HoloLens and the Surface Hub but I have not tried these yet. The Phone and desktop versions have slightly different user interfaces however both are very user friendly.

When you first open the mobile version, you will get the following screen. Just tap on the options you would like to use. 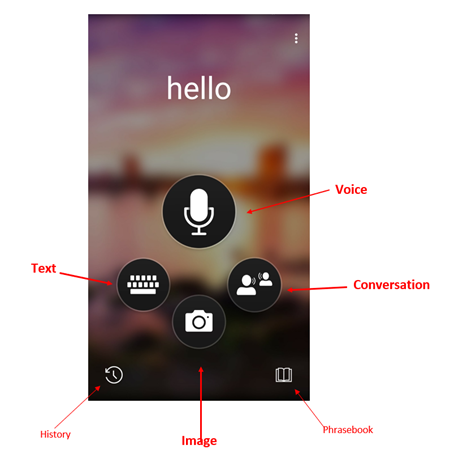 Following is the desktop version. I have opted to use the light theme, but you can change it to the dark theme from Settings as well. 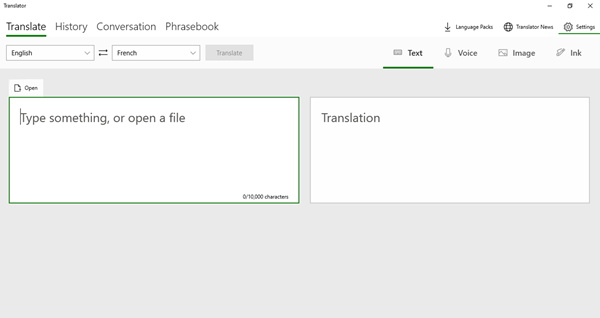 Select the keyboard button on the screen then select the languages you want to translate and type a phrase. (I can confirm that is the correct translation in French) 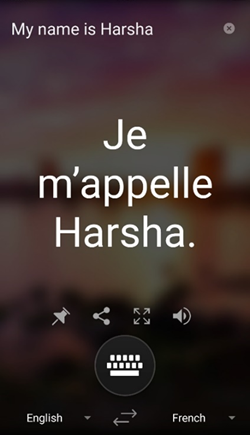 The four options allow you to

One of my favourite features is the speaker which reads out loud the phrase in the translated language hence you can get the app to speak the message and avoid mispronunciations.

Select the microphone button and tap to speak a phrase. The app will translate what you say into text and speak it out loud as well. 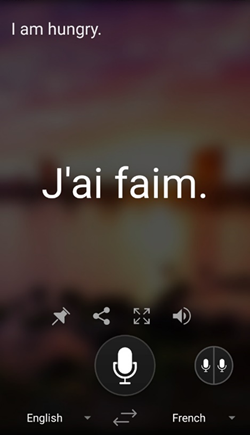 If you tap the smaller split microphone button on the right, you can split the screen to speak two languages into the app. The app will do all the work of translating and speaking out loud the translation to the other person. You won’t need to worry about interacting with or misunderstanding the locals and getting lost anymore. 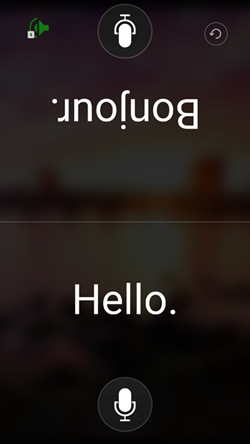 Select the Camera button to either translate text on an image by taking a picture or from an image in your file. 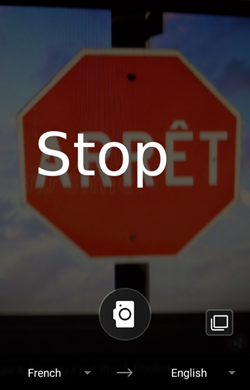 Enter your name, select your language and share the code with others who will join. You can also join a conversation by entering the code. Just speak or type the message in your language. Your message will be translated into the other participants’ language. An example below, I am communicating in English with a French speaker Julie. 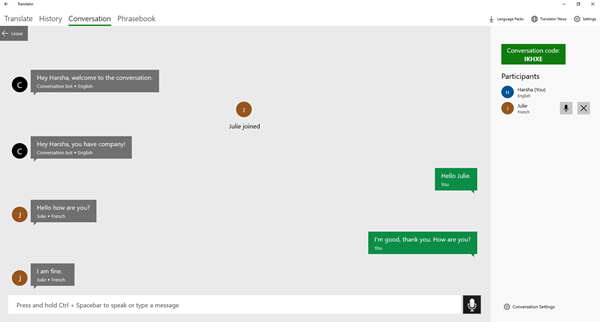 My message is translated into French for my friend Julie and vice versa. 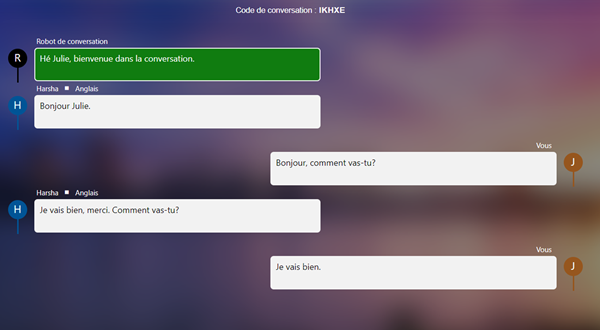 You can have translated conversations on multiple devices or on the website at https://translator.microsoft.com/

This feature is available on the desktop version which allows you to translate sentences written with the mouse, stylus or your finger.

The app comes with a phrase book which you can refer quickly for common phrases when you are traveling. 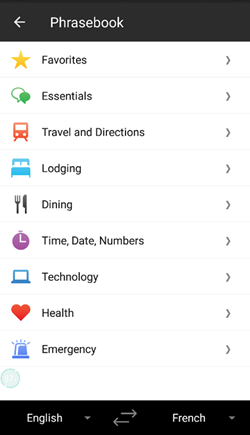 It also has the option to pronounce the phrases as well. 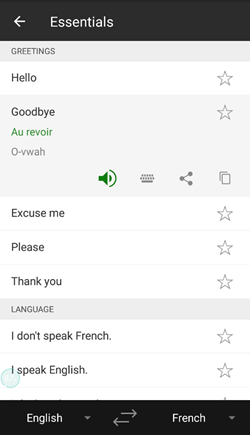 If you know that you will not have access to the internet, you can download the languages so that you can still use the translator offline. Offline languages allow to translate text and images without the internet but not voice translation. 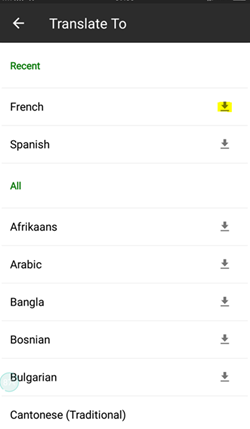 As you can see, the Translator App has many features to assist you in translating the world around you whether you are traveling, working or learning. The conversation feature is a really powerful tool to break down the language barrier allowing you to have real time conversations and share your message with a wider audience. You can participate in conversations regardless of the language. You can travel with ease knowing you will be able to communicate effectively with the locals.

At work, you can expand your business by interacting with people and customers from around the world. If you work in the emergency services sector, you can communicate your message effectively to people who may not understand your language.

At school, teachers can use the app to help integrate new students in a foreign country by bridging the communication gap and assisting with learning the new language. An app like this would have been really helpful for me to do my homework or talk with my classmates at school when I first moved to New Zealand but of course back then, apps didn’t even exist.

People with speaking or hearing disabilities can use the app to communicate more easily with others.

The Translator App is part of the AI for Cultural Heritage initiative by Microsoft using AI to assist people and organisations in preserving culture and language. Adding the Māori language is one such programme which helps the people of New Zealand to preserve the language for future generations through this new technology. The app can translate Te Reo Maori text into other languages and vice versa.

Language is what makes the culture and when it is lost, you lose with it its past and its identity. Language expresses human behaviour and emotions in ways unique to that culture which cannot be expressed in another language. It also holds a body of knowledge and helps to interpret the world around us and solve problems differently. As you can see, AI is not that bad if you use its capabilities in ways that enrich us and our environment for the better.