Now that I've got your attention, the truth: Dynamics 365 CRM v9 is actually very quick! The Power Platform team has done an amazing job getting screens to load within a couple of seconds. This of course is the case for the majority of people using the platform. However, sometimes, you’ll hear comments like “The system is slow” from users, so how do you deal with such cases when you know the platform itself is good?

How a system performs is based on several key items. The majority of the time, users put ‘slowness’ down to what’s right in front of them which is Dynamics 365 CRM. And then helpdesk/consultants/developers dive straight into Dynamics 365 CRM or the Power Platform to find the cause. This might be causing you to waste time and energy.

Let’s have a look at the things that make a system perform. 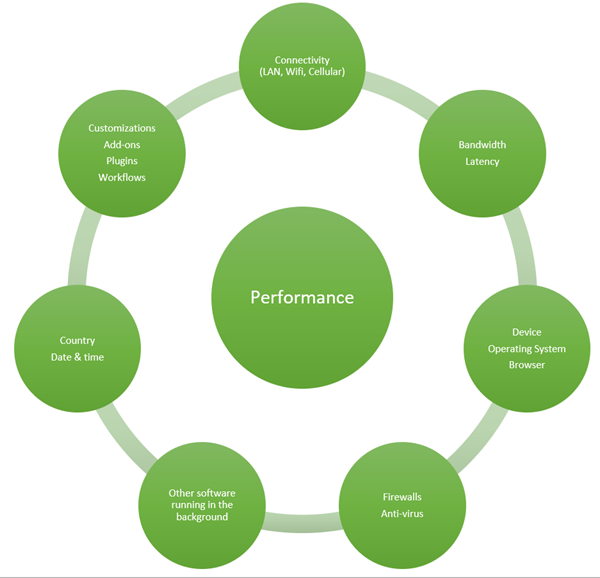 To get optimal performance, you need to have all the above items working as one without running into each other. When you get one or more items misbehaving, you’ll start seeing poor performance.

So, a tip for everyone, before you go straight into troubleshooting the power platform, Dynamics 365 CRM customizations, add-ons, plugins & workflows; you should capture information about things such as firewalls, anti-virus software, browser information, bandwidth, latency, day and time of day, what type of connection the user is using etc. This’ll help you to swiftly resolve any ‘slowness’ issues and also provide better responses to your users.

Here are couple of stories…

Back in 2012 we were carrying out a large upgrade project from CRM 4 to CRM 2011, during the performance testing phase of the project the testers said performance was terrible, this then got relayed to the project sponsor and panic started to kick in. We were baffled as to why it was like this because on skinny hardware it ran perfectly fine. So instead of looking into CRM customizations/plugins/workflows as the testers/business suggested, we decided to look into network traces. By doing this, we discovered that they had a device called Riverbed to optimize WAN traffic, and that the device was stripping authentication and compression and re-doing them. CRM did a good job by itself, but the device tried to see if it could do better, but it made things worse!

About 5 years ago before the Australian data centre was available, we put clients into the Singapore/Hong Kong data centre. The network latency and bandwidth from New Zealand to Singapore/Hong Kong isn’t that great, it was marginal at best and just met the Dynamics CRM requirement criteria. During system testing and user acceptance testing the system worked fine, however, two or three weeks of the system being live, the users started complaining that the system was slow between lunch time and 3-4pm. After spending another week or so trying to track it down, we realised that New Zealand is about 5 hours ahead of Singapore. So when it’s lunch time here in New Zealand, it’s about 7-8am in Singapore when everyone is at work. All the networks got clogged and slowed everything down! The cure? We got an express route with better peering with ISPs.

The moral of these stories? It’s rarely the fault of the Power Platform/Dynamics 365 CRM, so it's better to check all the other stuff before getting into the weeds.