The following image shows the configuration for the Opportunities Status and Status Reason option sets.

This method involves loading the Opportunities with their StateCode and StatusCode columns and adding additional Calculated Columns using DAX.

A DAX formula such as the one displayed below may be used. This formula is generic except for the name of the Calculated Column and the configuration of the _OPTION_SET_NAME and _OPTION_SET_VALUE variables.

In this example, the formula is used to create a new Calculated Column named Status. This formula looks up the corresponding Option Set Label for the OpportunityStateCode Option Set and the current row value of the Opportunities[StateCode] column.

In this example, the formula is used to create a new Calculated Column named Status Reason. This formula, looks up the corresponding Option Set Label for the OpportunityStatusCode Option Set and the current row value of the Opportunities[StatusCode] column.

When using this method, you should consider the following:

· When Power BI loads the data model into memory, it compresses the data model using complex algorithms. These algorithms include steps that optimise the compression by pre-sorting the rows in a table by their columns based on the cardinality, or uniqueness, of the values stored in each column. However, Calculated Columns are not included in this compression optimisation step. This is one reason why it is generally best practice to consider adding additional columns to a data model as Custom Columns using Power Query rather than as Calculated Columns using DAX.

This method involves loading the Opportunities with their StateCode and StatusCode columns and then adding additional Custom Columns using Power Query.

Here is how the GetOptionSetLabel() function works:

· Line 63 converts the OptionSetKey column from the table into a list using the Table.Column() function. This list is assigned to the variable named OptionSetKeysList.

· Line 64 converts the OptionSetLabel column from the table into a list using the Table.Column() function. This list is assigned to the variable named OptionSetLabelsList.

· Line 65 transforms the values of the OptionSetName and OptionSetValue function parameters into the same format as that used for the OptionSetKey column value in the Option Set table and assigns this to a variable named OptionSetKey.

· Lines 67 to 70 get the corresponding Option Set Label for the same position using the value of Position as an index value. Alternately, the same “ERROR! … “ text is returned as that returned by the previously demonstrated DAX formula. This is assigned to a variable named OptionSetLabel and is returned as the Result.

Following are two examples of how the GetOptionSetLabel() function may be used. The first example adds a new Custom Column, while the second example transforms the existing column.

In this example, the GetOptionSetLabel() method is used add a new Custom Column named Status Reason to the Opportunities table.

Add an Invoke Custom Function step to the query for Opportunities and configure it as follows: 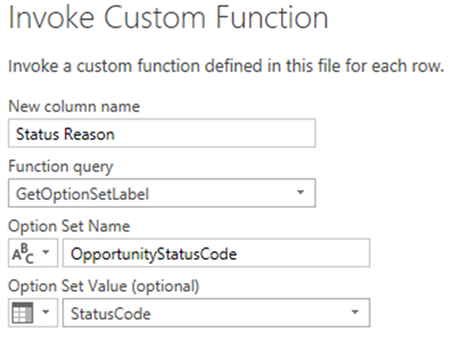 The resulting step looks like this. Note: I have formatted this step into multiple lines for clarity:

This step then needs to be manually updated as shown here by renaming the step and adding the output data type so that the resulting custom column has a data type of text rather than any.

The result of using this approach is that the data model contains both the StatusCode column and a corresponding custom Status Reason column.

Optionally: If required, a subsequent step may be added to remove the StatusCode column from the data model. However, you should consider whether that column should be retained for use as a Sort By column or by DAX formulas.

The result of this approach is that the data model contains a single Status Reason column. 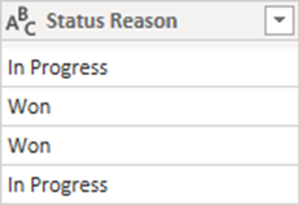