In my first article of this series, I introduced a demonstration of a custom Power BI embedded Canvas App, named ‘Marketing List App’, that is used to create new or replace existing static Marketing Lists in Dynamics 365 populated with a list of Supporters selected in a Power BI report.

The two most technically challenging aspects in implementing this functionally with respect to the large number of selected Supporters are firstly making all the Supporters available to the Marketing List App and secondly creating new or replacing existing Marketing Lists in a timely manner. Any number of Supporters from 1 to 150,000 may need to be processed.

The first technical challenge is resolved by the user first exporting the list of selected Supporters from Power BI to a Microsoft Excel file saved in SharePoint, and then manually starting a Power Apps Data Flow that imports the Supporters from the Microsoft Excel file into a custom entity. My previous article describes the configuration of this Data Flow named ‘Refresh Supporters (Marketing List App)’. This Data Flow takes approximately one minute per 1,000 Supporters to complete. This is the longest step in the end-to-end process. Other steps only require from a few seconds to a couple of minutes to complete.

In order to run this data flow, the Users

In the following formulas, this entity is referred to as ‘[@Marketing List Apps]’. 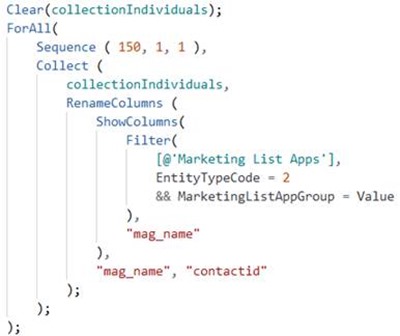 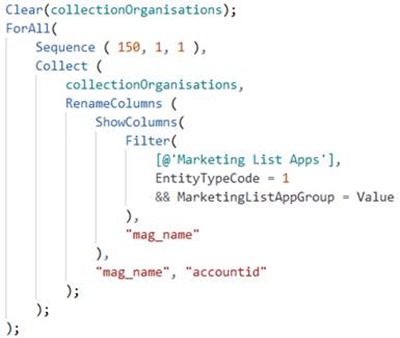 The ‘Refresh Supporters (Marketing List App)’ includes a step that sets the value of the ‘MarketingListAppGroup’ field for each Supporter. In this implementation, the Supporters are grouped into groups of 1,000. However, they could be grouped into any group size up to 2,000.

The Filter() clause of the formula works in conjunction with the Sequence() and ForAll() clauses. The ForAll() clause is invoked once for each value in the sequence. The sequence starts at 1 and finishes at 150 in increments of 1.

The ShowColumns() clause of the formula ensures that only the ‘mag_name’ field is retrieved from the entity. This field contains the CustomerKey for each Supporter. This clause optimises the performance of the formula. My Marketing List App does not need access to any other fields. Alternately, the formula could have instead selected the ‘mag_accountid’ and ‘mag_contactid’ columns from the entity.

The RenameColumns() clause of the formula renames the retrieved ‘mag_name’ column to either ‘contactid’ or ‘accountid’ based on whether the Supporter is an Individual or an Organisation because the CustomerKey is actually either an ‘accountid’ or a ‘accountid’.

The Collect() clause of the formula adds the Supporters retrieved by the current iteration of Sequence() to the corresponding collection. Depending on the total number of Supporters to be retrieved, not all iterations Sequence() invoked by the ForAll() clause will result in any additional Supporters being retrieved and added to the corresponding collection. However, inserting additional logic within the ForAll() loop to count the number of Supporters retrieved by the current iteration is not possible. However, both formulas iterate through the entire sequence in less than 30 seconds. 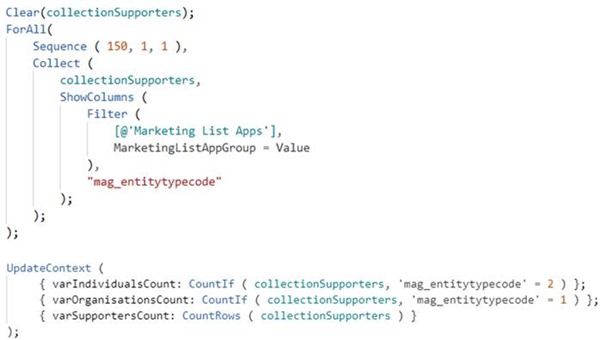 In my next article I will describe how my ‘Marketing List App’ and related components are configured to ensure that static Marketing Lists in Dynamics 365 with many thousands of Supporters added to them as Marketing List Members can be created in only a few seconds.