In my first article of this series, I introduced a demonstration of a custom Canvas App, named ‘Marketing List App’, that is used to create new or replace existing static Marketing Lists in Dynamics 365 populated with a list of Supporters selected in a Power BI report. 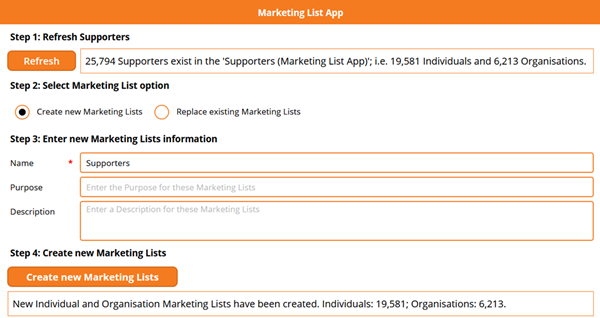 In this article I will describe an approach for ensuring that a list of many thousands of Supporters selected in the Power BI report are made available to the Canvas App.

This approach resolves the limitations encountered so far, and described in my previous articles, when attempting to use the ‘PowerApps for Power BI’ visualisation in the report and corresponding ‘PowerBIIntegration’.Data component in the app or attempting to use the ‘OneDrive’ or ‘OneDrive for Business’ connector to connect to a Microsoft Excel file that has been exported from the Power BI report.

Here is an outline of the complete end-to-end process. The user …

1. uses the Slicers in the Power BI report to filter the Supporters

5. starts a process that imports the contents of the Microsoft Excel file into a Common Data Services (CDS) entity

6. uses the ‘Marketing List App’ to create new or replace existing Marketing Lists from the selected list of Supporters.

The design of the Power BI report guides the user through this process. For instance, this page of the report provides instructions for the user and corresponding navigation buttons.

In the remainder of this article will describe how the list of Supporters are imported from the Microsoft Excel file into the CDS entity for use by the ‘Marketing List App’.

The following image shows the columns for the custom CDS entity. The physical name of this entity is ‘mag_marketinglistapp’ and its display name is ‘Supporters (Marketing List App)’.

When importing the list of Supporters from the Microsoft Excel file into this entity the following columns are populated: 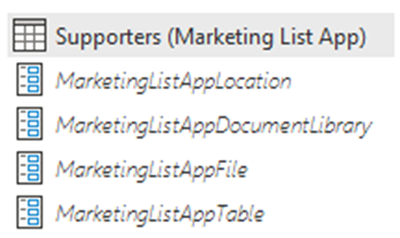 The Query has these eight steps: 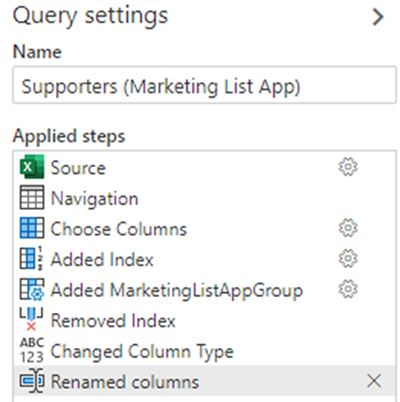 3. The Choose Columns step chooses only the CustomerKey and EntityTypeCode columns. Any other columns that might exist in the Microsoft Excel file are not used by the ‘Marketing List App’ and so do not need to be imported.

4. The Added Index step adds a unique sequential Index column to every row. This Index is used by the next step.

5. The Added MarketingListAppGroup step then groups every row into multiples of 1,000 based on the Index as follows:

Because a maximum of 150,000 rows can be exported from Power BI to Microsoft Excel, there would only ever be a maximum of 150 MarketingListAppGroup values when grouped into groups of 1,000.

A modification of this approach would be to make the sequential Index specific to Individuals versus Organisations and to group them into groups of 2,000.

6. The Remove Index step removes the Index column because this column is no longer needed.

7. The Change Column Type step changes the CustomerKey column to Text and the EntityTypeCode and MarketingListAppGroup columns to Whole Numbers.

8. The Rename Columns steps renamed CustomerKey to ‘mag_Name’, EntityTypeCode to ‘mag_EntityTypeCode’ and MarketingListGroup to ‘mag_MarketingListAppGroup’. This ensures that automatic mapping is effective at the Field Mapping step of the Data Flow configuration. 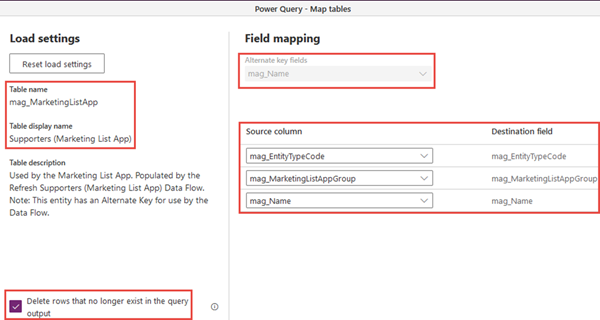 1. Prior to configuring the Data Flow, add an Alternate Key based on the CustomerKey, i.e. the ‘mag_name’, field to the ‘Supporters (Marketing List App)’ CDS entity.

Finally, the Data Flow is configured to be run manually rather than on a schedule. When required, the user can navigate to the Data Flows page by clicking Data Flows in the Power BI report and select the Refresh option on the ‘More options’ menu of the Data Flow. 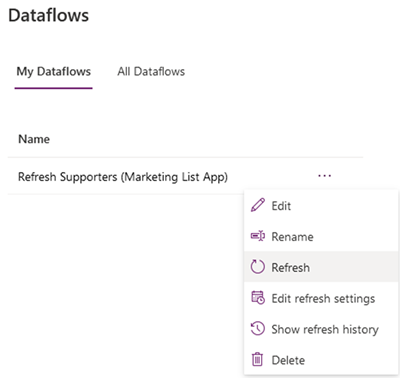 This approach resolves the limitations of the previously reviewed approaches. However, it does have these three limitations:

– Secondly, Power Apps Data Flows cannot be shared. Therefore, a separate copy of the Data Flow needs to be created for and owned by each User. In this implementation, this was not an issue, because there were only three Users.

If the methods of resolving these limitations are not suitable for your implementation, then a custom user invoked application or service may be used to refresh a CDS entity.