In this blog I will demonstrate how to reduce the number of columns in the Microsoft Dynamics CRM Online AccountSet, ContactSet and OpportunitySet OData Sets previously loaded into the Data Model in Microsoft Excel. This is an important initial step in the preparation of the OData Set queries for use in Power BI related reports. Completion of this step reduces clutter by removing unwanted columns, such as the base currency fields, and decreases the volume of data to be loaded and processed. This results in improved user focus on the information that is important and improves system performance.

In my previous blog I demonstrated how to access the Power Query Editor. From the Query Editor. Using the Query Editor we can remove unwanted columns from each OData Set. It is important to be aware of the fact that once columns are removed from the OData Set query, they cannot be restored. Therefore take care with this step! I perform this step prior to all other steps, such as expanding reordering or renaming columns.

•  Columns from the source entity such as Account; e.g. Name: 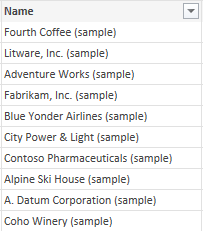 •  Parent relationship columns which when expanded provide access to the columns from a related parent entity such as the Primary Contact; i.e. account_primary_contact; not to be confused with PrimaryContactId which is a source entity column: 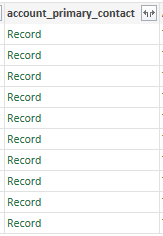 •  Child relationship columns which when expanded provide access to the columns and aggregated values from child entities such as related Opportunities; e.g. opportunity_customer_accounts: 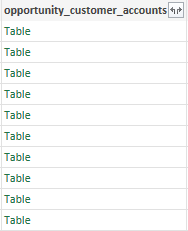 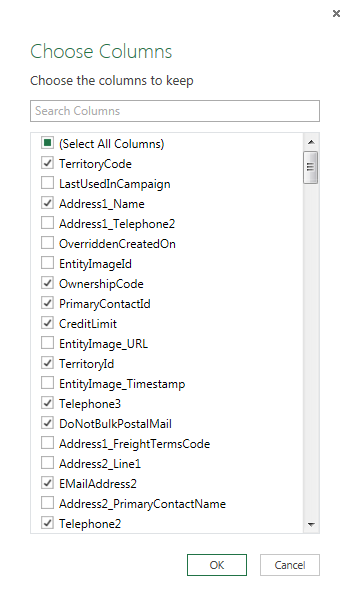 Using Choose Columns adds a Removed Other Columns step to the list of Applied Steps: 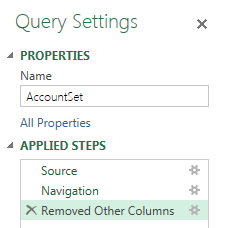 Using Remove Columns adds either a Removed Columns or a Removed Other Columns step to the list of Applied Steps depending on the option you selected. 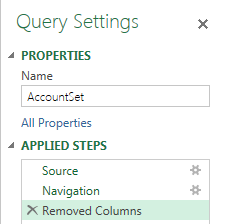 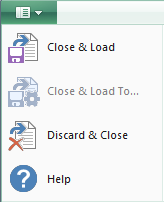 In addition to using the actions on the ribbon bar to apply steps to the OData Set queries you can also use the Advanced Editor, accessed from the View tab of the Query Editor, to view and directly add, edit and delete Applied Steps:

I have chosen to remove all AccountSet columns except for the following: 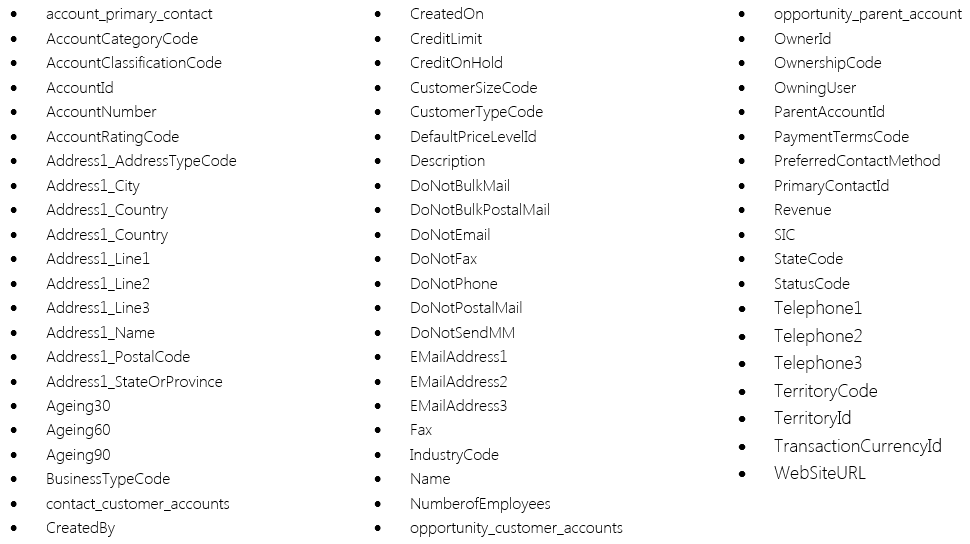 I have chosen to remove all ContactSet columns except for the following:

I have chosen to remove all OpportunitySet columns except for the following:

In my next blog I will demonstrate how to Expand the Option Set, Lookup, Money and parent/child relationship related columns want to use in Power BI related reports.